Join the Episode after party on Discord!
Link: https://discord.gg/ZzJSrGP

Trailer: https://youtu.be/9IIlEe20xL8
Release Date: July 7, 2020 on digital/VOD
Directed and Written by: Mark Z Silverman, Tracy Wuischpard
Starring: George Thomas, David Heavener, Diane Yang with Martin Kove, Robert Miano, Alexander Butterfield and Sonny West
Synopsis: Ladies and Gentlemen, the King of Rock N' Roll From Outer Space has blasted into Vegas from the far side of the Universe to compete in an Elvis impersonation contest with the best in town!!! But just as he is on the verge of victory, he mysteriously vanishes. Who’s behind the disappearance? The mafia? The CIA? Or the aliens he left behind?
Distributor: Giant Pictures

BIO: Tracy Wuischpard (Wish-pard) graduated from Carnegie-Mellon University in Pittsburgh where, along with her painting and filmmaking activities, she was a prominent member of the early punk rock music scene. Her band, The Shakes (later known as Combo Tactic), was well known on the scene and one of a handful of groups made up of artists from a variety of non-musical disciplines who picked up musical instruments with performance art in mind. She and her band left Pittsburgh in the early 80’s and headed to San Francisco, CA and later, Los Angeles where she took up editing; working on documentaries about Michael Jackson (ACE award winner) and Lou Reed. There she also used her musical skills to edit many music videos including an MTV award-winning piece for Edie Brickell at Propaganda Films.

In the late 90’s Ms. Wuischpard moved to New York City where she continued to pursue her editorial career working mostly in television and advertising. In 2008 she was in a devastating car accident which caused her to retire. After years of recuperation she got a call from an old friend from the Pittsburgh scene, Robert Elliott Balter. He now had a music publishing company in LA, Jordan/Balter Music, with partner Van Jordon. Robert called to ask her for technical advice regarding a film project he had in mind. His company had purchased the rights to a film they wanted to turn into something new.

The technical questions grew into conceptual questions and little by little, she was drawn into the project. Soon there was a request for story ideas. What could she do to make a new story from the old? It was an interesting problem, so she started to try to figure it out. Armed with stacks of index cards and a bulletin board, she set out to try to remake the story. When she pitched her idea Jordan/Balter loved it and they were off!

Things started to grow in complexity, so she asked her husband, editor Bruce Tovsky, to help out. He came on board and they began devising a way to cut away half of the old movie and add in new material that they either made (as animation), shot (via remote directing) or composited (pulling together both animation and live action elements) to make a new film. They even wrote music to score the new scenes. Bruce had been playing on the experiment scene in New York for years. They had a recurring experimental music and film salon at their studio in the Brooklyn Navy Yard. So, this opportunity was just the kind of project they were made to do.

Prior film credits include:
“Michael Jackson: The Legend Continues”
Worked as part of a team of editors and won ACE award for editing

Join the episode after party on Discord!
Link: https://discord.gg/ZzJSrGP

Support the podcast and shop @ http://shopthedarkhorde.com

Call the show anytime at (972) 290-1329 and leave us a message with your point of view, UFO sighting, and ghostly experiences or join the discussion on www.ufobusterradio.com 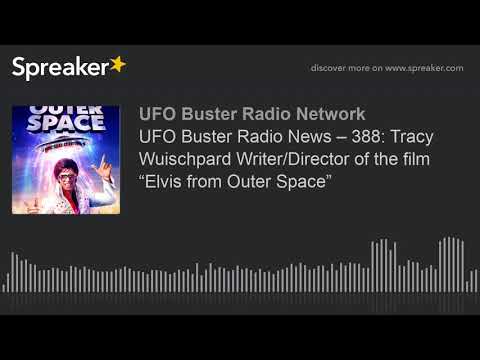